(A Living legend and Laughing Saint of Himalayas)

Swami Laxmandas Avadhootji is a living legend, one of the greatest yoga and spiritual masters who is known as Laughing Saint of Himalayas. He is Nitya Koti (ever realized) - a living realized master and an epitome of love, peace and wisdom. Every devotee and disciple claims that master loves him/her much more than the rest, a living example of manifestation of eternal consciousness like Gopis, always considered that Lord Krishna loved them much more than any other person. For the last more than 50 years, he is offering blessings to his disciples, monks and people whosoever approaches him.

A wandering monk at the age of 12 years, penance in Gangotri and Rishikesh for more than 10 years, complete surrender to his master, fearlessness, courage and love, compassion for all had evolved him much faster than normal spiritual aspirants. Not much is known about his birthday as he followed strictly the order of monk, not to divulge the birth and about parents to anyone. Many disciples claim that his birthday falls on 15th August in beginning of 20th century. Swamiji learnt under a great Yoga master of his times Swami Sharandasji, who gave him a name, Swami Laxman Das. Later, when he went to another master, Swami Paramanand Avadhootji, his name changed to Swami Laxmandas Avadhootji. A close disciple who served the master for more than 50 years, claim that Swamiji got his enlightenment at the age of 35. Since then, he has been working silently upon his disciples, many monks and who approach him for their spiritual evolution. After his enlightenment, he travelled across India for more than 5 years on foot, meeting saints, monks of different traditions in order to bring about integration in spiritual science. Later, he went on pilgrimage on foot to Gangorti, Yamnotri, Kedarnath, Amarnath and Badrinath, crossing one mountain to others for many months.

He is a spiritual master of Vedic order, who never shares any platform but always guides, inspires whosever approaches him. Gurudev says, " The more the spirituality, the less the inclination towards materialism. The real master always hides himself from public while others always make efforts to remain in picture." He further says," let there be divine command which manifests in every cell of the body, can only make you a master. There should not be any claim of becoming a master as even a trace of Maya (egoism) in you will take you far away from divine." 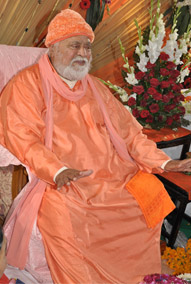 His simple interpretation, living examples and easy understanding of great scriptures like Bhagvad Gita, Astavakra Gita, Patanjali Yoga Sutra, Avadhoot Gita, Vairagya Shataka, Brham Sutra, and many more (which he remembers even now at the age or more than 80 years) have inspired millions to tread the path spirituality, self perfection and conscious evolution.

His talks inspires and goes directly into heart and head, which he speaks with references from Vedas, Upanishads, Darshan ( Indian Philosophy), Yoga and Brahm Sutra and many other scriptures. A unique interpretation of Astavakra Gita, Avadhoot Gita, Vairagya Shataka, had inspired hundreds of monks of Himalayas. The author is a witness that more than 50 monks who rose very high in modern world during the last 30 years, had spent years at the feet of Gurudev, learning, understanding and practicing Sadhana either in Gangotri or Rishikesh. A true example of his complete devotion to his master reflected in his service to monks continuously for more than 50 years. He is still serving monks especially spiritual aspirants who receive all essential items for survival every month.

His smile is contagious and mesmeric and his speech inspiring and awakening. His steps are enlightening and his blessings are giver of all boons. He never shares any social platform but works relentlessly for spiritual aspirants in Himalayas and offering all helps to more than 300 saints and monks. One master, gave him the name," Laxmandas" and other "avdhoot" so he became Swami Laxmandas Avadhootji. There are many modern days' monks, saints and yoga experts in India and abroad who are famous all over the world, were blessed by Swami Laxmandas Avadhootji, during his stay at Gangotri and Rishikesh.

Every moment, he sends message silently either through a parable, statement or explanation of sutra from scriptures which become guiding force for disciples who follow without question. He offers what is best to a disciple rather than what a disciple seeks from him. Swami Laxmandas Avadhootji always works silently upon disciple to reach to pinnacle of peace, prosperity and success even if he has to negate and reject the ignorant demands. He considers that Self Grace (self effort done consciously to search divine) is much greater than Guru Grace (grace by Guru) and Grace of scriptures (intellectual reading and understanding of scriptures).

Many great and influential persons of the society approached him for boon, which he offered unconditionally. But when these people requested him to start big ashram, he refused plainly saying that," whosoever aspires for spirituality, will be directed by divine here. I will not go anywhere. Let an urge for self discovery in a person guide him/her to tread the path of self perfection." Later, disciples built an ashram in Rishikesh, near Laxman Jhula. He spends winter in the Rishikesh Ashram and summer in Gangotri Ashram, where he practiced his Sadhana.

His sayings have been bridged into a book known as "Laxman mala" or 108 beads of Laxman (Swami Laxmandas Avadhootji). His teachings are simple, easy to follow and practice, integrates Path of Karma, Jnana (knowledge), Bhakti (devotion) and selfless service. The apt and spontaneous references from Bible, Kuran, Vedas, Guru Granth Sahib, Dhammpadda and other scriptures make him a living encyclopedia of peace, harmony, love, wisdom and bliss.

Ho always smiled and brought smile on every face, frequently said to all," Laxman says only one thing and that is keep smiling".

stay upto date with our newsletter.